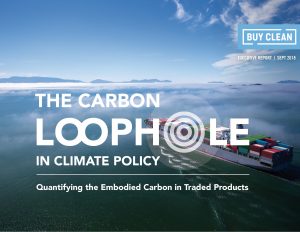 In an article examining the costs of carbon pollution “outsourcing” this week, The New York Times featured a report co-authored by ERG student Cecilia Springer. The report, The Carbon Loophole in Climate Policy, explains how approximately 25 percent of the world’s carbon emissions are not accounted for in the national emissions reduction targets set by the Paris climate agreement.

“Over the past decade, both the United States and Europe have made major strides in reducing their greenhouse gas emissions at home. That trend is often held up as a sign of progress in the fight against climate change. But those efforts look a lot less impressive once you take trade into account. Many wealthy countries have effectively “outsourced” a big chunk of their carbon pollution overseas, by importing more steel, cement and other goods from factories in China and other places, rather than producing it domestically.

…The report, written with the consulting firm KGM & Associates and ClimateWorks, calls this a “carbon loophole,” since countries rarely scrutinize the carbon footprint of the goods they import.”

The report was also featured in The Washington Post, Quartz India, and Marketplace radio show.