Will Dr. Harte’s MaxEnt lead to a unified theory of ecology?September 4, 2014 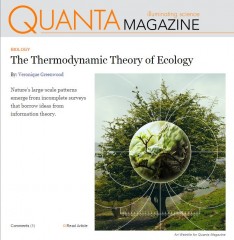 How do you count the number of species in an ecosystem? ERG Professor John Harte is on the verge of making back-of-the-envelope calculations a practical reality in the world of ecology. He does so with what he calls a maximum entropy (MaxEnt) theory of ecology. Simons Foundation’s Quanta Magazine has recently featured Dr. Harte and the MaxEnt approach:

The power of the MaxEnt approach to ecology is that it doesn’t try to deal with the details of these species — it doesn’t take into account, for instance, how fast an elephant moves, or whether macaques are territorial. Instead it uses ideas from information theory to calculate the likeliest scenarios that could have given rise to fragmented data.

Vanessa Weinberger of the Pontifical Catholic University of Chile says,

MaxEnt breaks everything that we ever thought about communities and species and ecology. … And that’s the cool thing about John Harte: He is saying, let’s keep it simple … and just with four parameters, at a mini or a macro scale, you can figure out how to describe these patterns.

Dr. Harte had used the MaxEnt approach to predict the number of species in South Asia’s Western Ghats, publishing a paper on this in 2009. Results from a study in Panama by Dr. Harte and his colleagues are to be published soon.

Read more about Professor Harte and MaxEnt theory in the most recent Quanta Magazine.