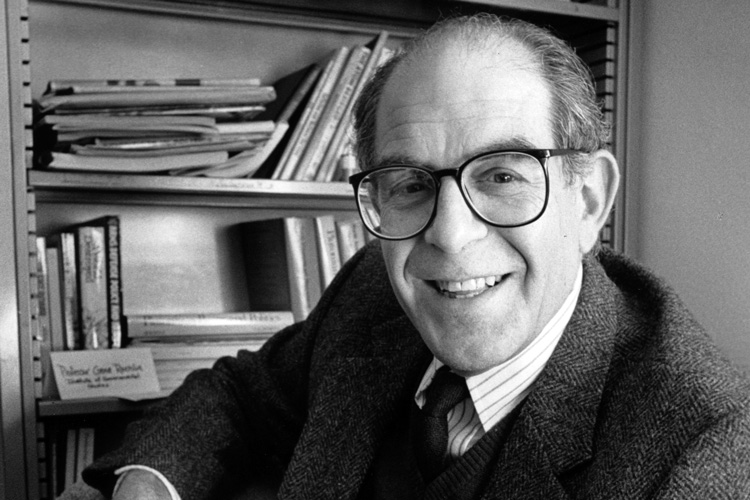 It is with a very heavy heart that I have to pass on the news that University of California Berkeley Energy and Resources Group (ERG) core faculty emeritus Gene Rochlin passed away this weekend.  The last night before suffering a stroke, he spent his final dinner surrounded by his sons, their wives, and all of his grandchildren.

Gene was an incredibly vibrant and integral part of ERG.  His own transition from physics to the social and political study of science, complexity, and engineered systems mirrored what so many of us find critical and central to the Energy and Resources Group.  Among his many publications, his books, Scientific Technology and Social Change (1974), Plutonium, Power, and Politics (1979), and Trapped in the Net (1997) explored both the high profile and the more nuanced aspects of science and society.

Gene was an invaluable teacher and mentor to generations of ERG and UC Berkeley students.  He facilitated the dialog across campus between science, engineering and social science and the humanities.  In fact, even in retirement, Gene continued to play a core and inspiring role in ERG.  He would have taught a masters seminar this coming week.

In looking over Gene’s papers, his children wanted to pass on a small part of one of his poems that in many ways summed up Gene’s optimism and philosophy in mentoring and in building careers in sustainability:

Gene was also a tremendous friend and mentor outside the classroom.  His welcoming informal meetings with students, extensive conversations about career paths, and trips to Giants baseball games (especially when the Cubs were in town) showed just how fun and welcoming a role model and friend he was.

Gene will be sadly and sorely missed.

Gene I. Rochlin was Emeritus Professor of the Energy and Resources Group at the University of California, Berkeley. He received a B.S. in 1960, M.S. in 1961, and Ph.D. in 1966 from the University of Chicago, all in Physics. After teaching physics at Berkeley for several years, he retrained in political science as an advanced post-doctoral scholar at MIT and Harvard in the mid-1970s. His research interests included science, technology and society, cultural and cognitive studies of technical operations, the politics and policy of energy and environmental matters, and the broader cultural, organizational and social implications and consequences of technology – including large technical systems. He was a principle of the Berkeley High Reliability Project, a multidisciplinary team that studied the organizational aspects of safety-critical systems such as nuclear power and air traffic control, and continued to work on the management, regulation and control of large, complex, high-technology organizations performing socially critical functions as an independent scholar. This extended to studies that sought to apply methods, approaches, and theories from a broad spectrum of the humanities and social sciences to issues arising from the vulnerability of complex, sophisticated technologies and technical systems, particularly the global threats arising from human networks as well as natural phenomena.

Prof. Rochlin’s book “Trapped in the Net: The Unanticipated Consequences of Computerization” (Princeton: 1997), which focused on the vulnerability of organizations and institutions in an earlier phase of global technical integration, won the 1999 Don K. Price Award of the Science, Technology and Environmental Politics Section of the American Political Science Association. He was a Fellow of the American Physical Society, and served on the editorial board of several journals.

Expanded information on his research, publications, and instruction is available at:
https://sites.google.com/berkeley.edu/rochlin/home

To make a gift to ERG in Professor Rochlin’s honor please visit our giving page and indicate that your gift is in his memory.