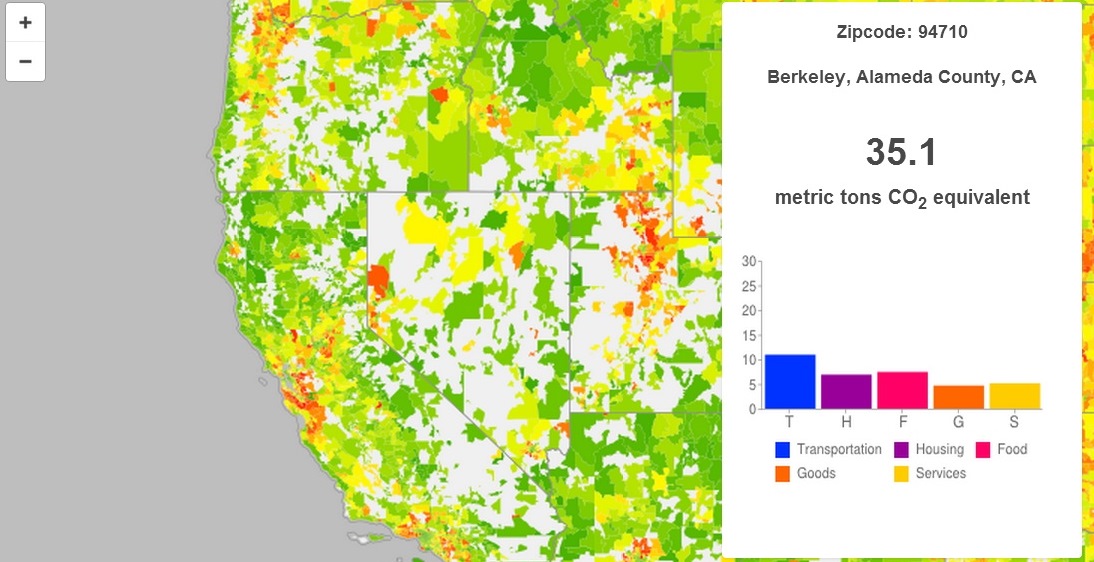 Christopher Jones and Daniel Kammen point out that U.S. households though they only comprise 4.3 percent of the global population, are responsible for about 20 percent of annual worldwide greenhouse gas emissions, which are driving climate change. In response, many governors and mayors across the country have pledged to reduce their states’ and cities’ emissions. But more information on the size and composition of household carbon footprint is needed to inform policies to make these reductions happen. A few studies have helped fill in some gaps, but they’re mostly small in scale and not broadly applicable. Kammen and Jones set out to paint a bigger picture.

The authors built an analytic model using national survey data to estimate average household carbon footprints for over 30,000 zip codes and 10,000 cities and towns in all fifty U.S. states. Their technique integrates a wide range of sectors, including transportation, household energy use and consumption of food, goods and services. The researchers found a number of surprising nuances in their analysis. For example, some studies have shown that more population-dense areas have lower emissions. But Jones and Kammen found that population-dense suburbs have significantly higher carbon footprints on average than lower density suburbs, and there is a huge range across cities.

As a result of large spatial differences in household carbon footprints they conclude that “an entirely new approach of highly tailored, community-scale carbon management is urgently needed.”  One approach is to develop communication and estimation tools for widespread use, which the authors have developed and implemented for public use at http://coolclimate.berkeley.edu/maps and http://coolclimate.berkeley.edu/carboncalculator

The authors acknowledge funding from the California Air Resources Board and the National Science Foundation (grants to D. Kammen).  Professor Kammen founded and directs the Renewable and Appropriate Energy Laboratory where this work was conducted.  Christopher Jones is a doctoral student advised by Professor Kammen.