ALUMNI SPOTLIGHT: SHARAD LÉLÉ Ph.D. 1993 Senior Fellow, Ashoka Trust for Research in Ecology and the Environment (Bangalore) Sharad Lele never intended to become an academic. And even though his resume is chock-full of scholarly publications, he still believes that applying the interdisciplinary academic knowledge gained at ERG defines ERG’s crucial role. After all, he says, we care about bridging interdisciplinary gaps not to solve some conceptual puzzle, but to address society’s most pressing environmental and social problems. We can only know whether academic solutions work by applying them. He arrived at ERG, however, with a rather narrow engineering-economic understanding of interdisciplinarity. He recalls scoffing to a classmate after a colloquium that “social science seems just to be about spinning stories and has no predictive power,” prompting classmate Michel Gelobter “to run to his bookshelf and pull out Alexis de Tocqueville’s book Democracy in America and show me the passages where Tocqueville predicted (in 1835) that the U.S. and Russia would be global superpowers in the days to come. It really changed my attitude towards the social sciences.” Similarly, after giving a brown bag lunch presentation of what he understood from a review of the then-emerging concept of “sustainability,” ERG affiliate Nancy Peluso scolded him for describing it as a purely technical concept and missing the social context of “sustainability of what and for whom?” “While I remain skeptical of the extreme social constructivism of many political ecologists,” he says, “this incident did lead me, with Dick Norgaard’s guidance, to engage much more with the issue of the normative and ideological content of science, a perspective that has stayed with me.” Given his outlook, Sharad is well-situated at the Ashoka Trust for Research in Ecology and the Environment (ATREE), an applied research institute. Central to ATREE’s mission is to promote the use of its own interdisciplinary scholarship in society, with the aim of achieving sustainable development in a socially just manner. There, Sharad focuses on forests (the topic of his Ph.D. dissertation) and water issues. In his approach, though a co-founder of the Indian Society for Ecological Economics and a board member of the umbrella International Society – themselves interdisciplinary professional groups, he needed the additional lens of environmental governance to address the problems he was grappling with. Environmental governance is now his primary niche. With cities using rivers as sewers, alarming rates of groundwater depletion, and decimated forests, he needed to ask both “how do we affect the behavior of individual actors” and “how do we change the behavior of agencies” in service of the objectives of environmental law? With a void of long-term thinking at the national level, and with the current government vacillating between ignoring problems and then over-reacting to court rulings or public outcry in ways that are irrational (but generate good headlines), change comes frustratingly slowly, if at all. Sharad nevertheless remains not only hopeful but also visionary. In his work on forests, as a member of the Joint Committee of the Indian Government’s Ministry of Environment and Forests and Ministry of Tribal Affairs, Sharad studied the implementation of the 2006 Forest Rights Act. The law enables local communities to claim rights to the forests they have used for centuries, though these rights largely vanished under British rule later emulated by the Indian government. As rights have been recognized for thousands of villages, new questions have arisen, such as “how can communities be helped to manage forests sustainably (and what does that mean)?”, “how can benefits from forests be distributed equitably?” and “what is the role of the forest department in the new dispensation.” In response, Sharad has advocated a multi-layered forest governance system, requiring not only changing forest rights, but also restructuring mindsets, bureaucratic structures and powers, and “even community attitudes towards taking on responsibilities rather than just waiting for handouts.” In his work on water issues, Sharad promotes an integrated understanding of the hydrological cycle, pointing out that, because most groundwater sources are flows, providing benefits wherever the flow ends up, tapping into that water is a question of “flow here or flow there?” rather than one of “sustainable groundwater use.” Drawing the boundaries around the flow and fairly allocating that flow are the important questions. Sharad and his colleagues have wrestled with these difficult questions in an urbanizing basin in Karnataka state, a state that is experiencing drought. He is also pushing urban water supply agencies to think integratively about ground and surface water, imported and local water, and fresh and waste water. Sharad’s belief in the primacy of applied, interdisciplinary study does not keep him from reflecting on the complexity of that endeavor. In a retrospective on ATREE’s 20-year history, Sharad writes that “our environmental science must be underpinned by a conscious, self-reflective, multi-dimensional environmental and social ethic. … But what will also be required is developing ways of engaging with diverse social groups, and of reducing the hierarchies between scientists and lay people.” His work exemplifies that aspiration. 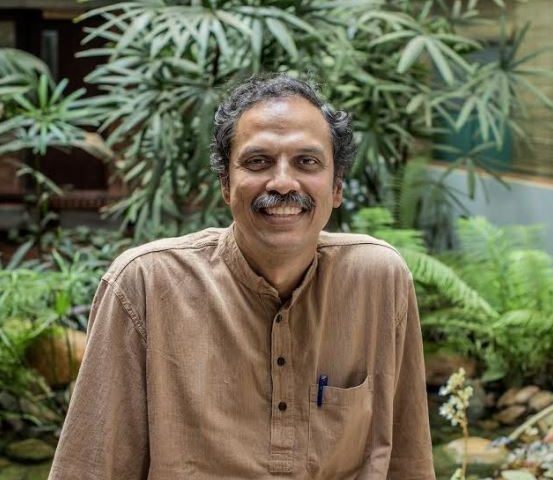