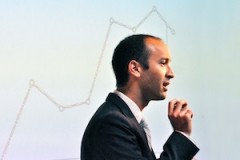 Energy and Resources Group Spring 2014 Col­lo­quium Series (ER295) TITLE: Destruction, Disinvestment, and Death: Economic and Human Losses Following Environmental Disaster SPEAKER: Sol Hsiang Assistant Professor Goldman School of Public Policy UC Berkeley The immediate physical damages caused by environmental disasters are conspicuous and often the focus of media and government attention. In contrast, the nature and magnitude of post-disaster losses remain largely unknown because they are not easily observable. Here we exploit annual variation in the incidence of typhoons (West-Pacific hurricanes) to identify post-disaster losses within Filipino households. We find that unearned income and excess infant mortality in the year after typhoon exposure outnumber immediate damages and death tolls roughly 15-to-1. Typhoons destroy durable assets and depress incomes, leading to broad expenditure reductions achieved in part through disinvestments in health and human capital. Infant mortality mirrors these economic responses, and additional findings — that only female infants are at risk, that sibling competition elevates risk, and that infants conceived after a typhoon are also at risk — indicate that this excess mortality results from household decisions made while coping with post-disaster economic conditions. We estimate that these post-typhoon “economic deaths” constitute 13% of the overall infant mortality rate in the Philippines. Taken together, these results indicate that economic and human losses due to environmental disaster may be an order of magnitude larger than previously thought and that adaptive decision-making may amplify, rather than dampen, disasters’ social cost. SOLOMON HSIANG combines data with mathematical models to understand how society and the environment influence one another. In particular, he focuses on how policy can encourage economic development while managing the global climate. His research has been published in Science, Nature, and the Proceedings of the National Academy of Sciences. Hsiang earned a BS in Earth, Atmospheric and Planetary Science and a BS in Urban Studies and Planning from the Massachusetts Institute of Technology, and he received a PhD in Sustainable Development from Columbia University. He was a Post-Doctoral Fellow in Applied Econometrics at the National Bureau of Economic Research (NBER) and a Post-Doctoral Fellow in Science, Technology and Environmental Policy at Princeton University. Hsiang is currently an Assistant Professor of Public Policy at the University of California, Berkeley and a Faculty Research Fellow at the NBER. In 2013, Hsiang became the inaugural recipient of the American Geophysical Union’s Science for Solutions Award for “significant contributions in the application and use of Earth and space sciences to solve societal problems”. In 2014, Hsiang was named in Forbes Magazine’s 30 Under 30 in Law and Policy.