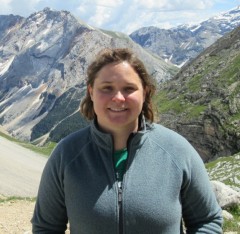 SPEAKER: Frances Moore Ciriancy – Wantrup Fellow UC Berkeley DATE: Wednesday, September 23, 2015 TIME: 4:00 P.M. PLACE: 126 Barrows Hall TITLE: Climate Change Impacts on Economic Growth: Empirical Evidence and Policy Implications Frances C. Moore recently started as a Ciriacy-Wantrup Post-doctoral Fellow in the Department of Agriculture and Resource Economics at UC Berkeley. Her work bridges environmental science and economics in order to better understand climate change impacts and adaptation. Her PhD work focused on agriculture and on the development of new econometric and experimental methods to improve estimates of the rate and effectiveness of private adaptation by farmers. She has also worked to incorporate recent econometric results into Integrated Assessment Models in order to improve the empirical basis of social cost of carbon estimates. Earlier work focused on understanding the development of adaptation funding and policy within the international climate negotiations. Fran received her PhD from the Emmett Interdisciplinary Program in Environment and Resources at Stanford University in 2015. She also holds a Masters in Environmental Science from the Yale School of Forestry and Environmental Studies and a BA., summa cum laude, in Earth and Planetary Sciences from Harvard University. Recent empirical results suggest that weather shocks may have long-term impacts by affecting not just the level of GDP but its growth rate. This would be expected to have first-order implications for optimal mitigation policy. Fran will be presenting a paper, co-authored with Delavane Diaz, that incorporates these empirical estimates into the DICE model. Results show that, even with optimistic adaptation assumptions, these damages imply the need for rapid mitigation that stabilizes global temperatures below two degrees Celsius above pre-industrial temperatures. A sensitivity analysis shows that the uncertainty in optimal mitigation policy associated with the magnitude of growth-rate impacts is large compared to more widely-discussed uncertainties such as the discount rate or the climate sensitivity. The end of the talk will introduce some new empirical results that attempt to disentangle the role of temperature and poverty in driving the high sensitivity to warmer temperatures observed in poor countries.